Sight Magazine – Essay: Global voter turnout has been declining since the 1960s – we wanted to know why

Any democratic nation in the world holding a legislative or presidential election in the late 1960s could expect about 77% of its citizens to go to the polls. These days, they can expect more than 67%, a drop that is both problematic and confusing.

Research shows this low turnout is bad for democracy. This usually means that socio-economically disadvantaged citizens vote less and, therefore, public policies benefit the wealthy. Politicians feel less scrutinized by the public and turn a deaf ear to the needs of the general public. Instead of formulating broad public policies that serve society as a whole, governments can more easily target the benefits on their main supporters.

A sign is pictured during the Canadian Federal Election, in Kingston, Ontario, Canada, on September 20. Photo: Reuters / Lars Hagberg.

And the drop occurred in a context that might be more likely to involve an increase in voter turnout. Educational attainment has risen since the 1960s, for example, and election results have come closer – which would be said to mobilize voters.

Researchers and experts have proposed several hypotheses for the decline. Some believe that political discontent has increased and is pushing people away. Others cite economic globalization, suggesting that if national governments wield less power, the stakes in their national elections are lower and people will not see the point of participating. We tested all of these hypotheses in the largest cross-country study to study voter turnout to date, drawing on 1,421 national elections and 314,071 individual observations from high-quality post-election surveys. 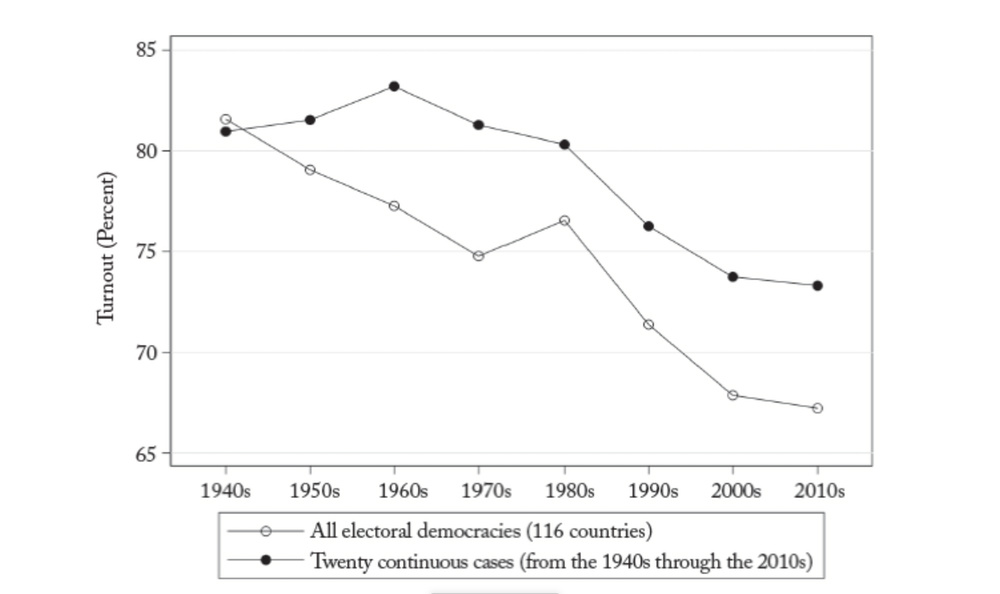 Generation change
Our statistical analysis did not find support for most of the popular explanations. Instead, we have identified two main causes. The first is a generational change resulting from economic development. People born into richer societies develop values ​​less conducive to participation. Once countries reach a certain level of economic wealth, new generations become less respectful authorities and less likely to conceptualize voting as a civic duty. They go to the polls less often than their older counterparts, who were socialized at earlier stages of economic development. The mechanical process of generation replacement, whereby the share of new generations in the electorate increases as older generations die, accounts for 56% of the decline in voters.

The other main cause, responsible for 21% of the decrease, is the increase in the number of elective establishments. When elections are more frequent, voter fatigue sets in and people’s interest in participating decreases. In Europe, the number of elected institutions has increased by 34% since the 1960s. This has been motivated by European integration, state decentralization, the frequent use of direct democracy and institutional reforms such as the introduction of directly elected presidents. If voters are invited to vote almost twice a year, as in France, some of them will get bored and not bother.

Following the fall?
The generational nature of the problem suggests that participation may continue to decline. But it is not inevitable. If the new generations vote on average less than the older generations, they mobilize in particularly polarized contexts where many seem to be at stake. For example, the last presidential election in the United States in November 2020, during which the outgoing president controversial Donald Trump called for re-election, gave the highest voter turnout in the United States for 120 years.

The rise of cultural and environmental issues, which the new generations cares deeply about, could also offset part of the generational drops in participation.

Governments can also help by reducing the number of times citizens are called to the voting booth. This can be achieved without reducing the rights of citizens by rearranging electoral calendars and combining different types of elections on the same day.

Philippe Kostelka is a lecturer (assistant professor) in public administration at the University of Essex and André Blais is a full professor in the Department of Political Science of the Montreal university. This article is republished from The conversation under a Creative Commons license. Read it original article.

Body hair is sexy no matter what the company says: essay

Weekend Essay: Drawing the Line to Go “Beyond and Beyond”

Sight Magazine – Essay: Plastic waste in the ocean is a global problem, and the US is the main source – new report calls for action