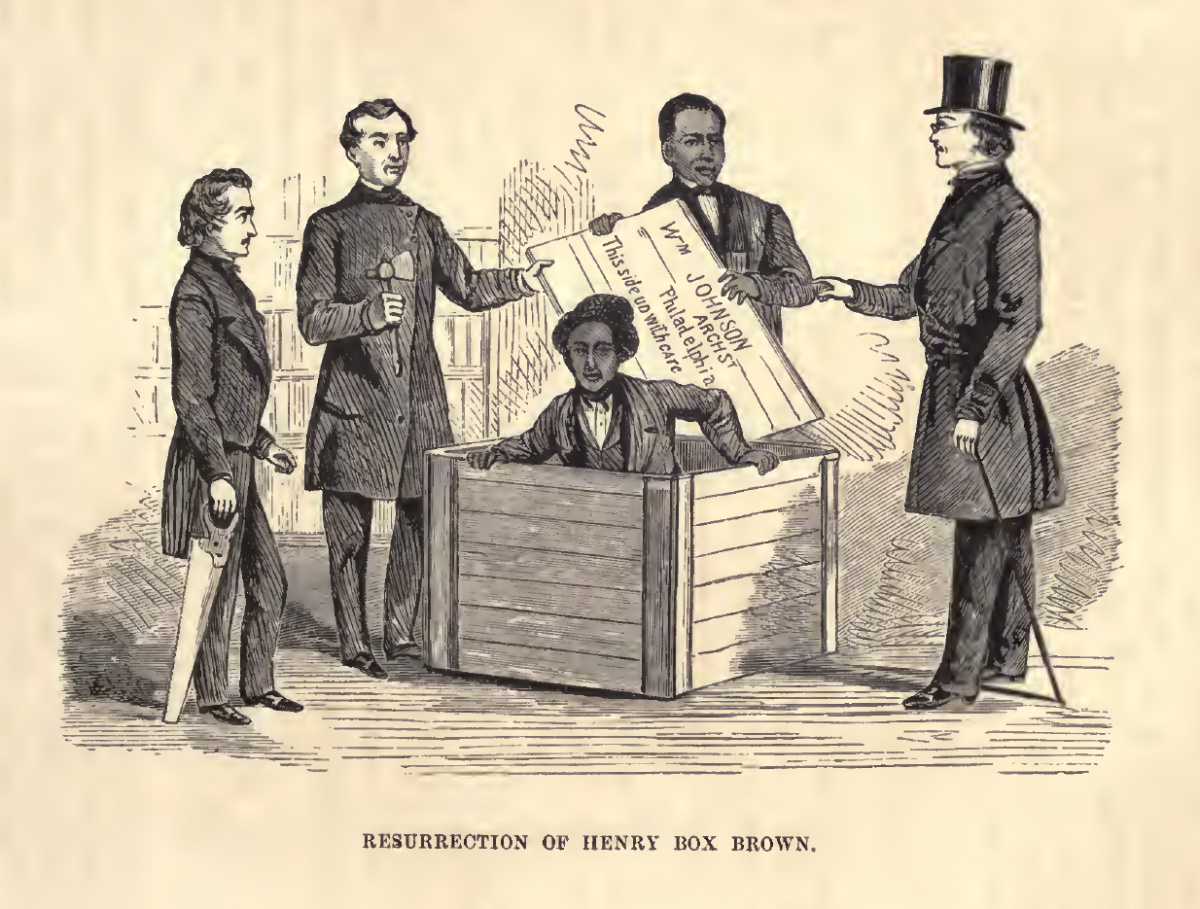 “Better to be cunning than strong” is a Jamaican proverb; a message of survival and resistance that prompts us to use our brain rather than our muscles to defeat the oppressors. It’s a proverb that is summed up by Jamaican trickster folk hero Anansi.

Anansi is of West African descent and has become a central part of the oral tradition of slaves in the Caribbean. When caught in a terrible situation, Anansi would find his way through intelligence, disguise, subterfuge, and wit.

These survival and resistance tactics were used by black abolitionists Ellen and William Craft and Henry “Box” Brown. Disguise and performance were central to their escape from slavery, political activism, and appealing to white audiences. Black abolitionists shared their experiences of slavery to change the hearts and minds of ordinary people on both sides of the Atlantic. However, their work is often obscured in the national narrative of Britain’s role in slavery.

Arrival of Henry “Box” Brown in Philadelphia. IMAGE: Via Wikimedia

Since the abolition of the slave trade on March 25, 1807, the historical narrative has focused on Britain’s role in the abolition – rather than the depth of Britain’s involvement in the slave trade and plantation slavery. The work of famous white abolitionists has long been applauded and highlighted, especially that of social reformer William wilberforce.

Yorkshire was at the heart of the abolitionist movement in the UK, but this focus on Wilberforce and his white peers also meant that many prominent black abolitionists who visited the county, giving talks and putting on anti-slavery shows, have long been neglected. 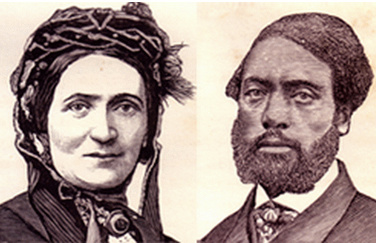 The Craftsmen helped advance the abolitionist cause by telling the story of their daring escape from slavery. IMAGE: Via Wikimedia

Following the rape of her mother by a white slave master, Ellen had fair skin and could “pass” for white. Their plan involved Ellen posing as a man and William acting as her trusty “valet”. Ellen would cut her hair and wear men’s clothes, and in that disguise they would head north to the Free States by steamboat and train.

Ellen couldn’t write, as slaves weren’t taught, so she bandaged her hand to avoid being asked to sign her name. They knew that if they were caught they would be tortured and separated. The plan worked, with Ellen sitting in the “only for whites” wagon of a train, undetected.

The Crafts settled in Boston until the late 1850s Fugitive Slave Act, which gave slave owners the power to travel from the south and take back slaves who had fled north. American abolitionists helped the Crafts raise enough money to flee to the relative safety of the UK. There they created a stage performance to highlight the terrors of slavery.

Activism through performance
As researcher Hannah-Rose Murray explains in the excellent Africans in Yorkshire project, Ellen Craft became a celebrity at anti-slavery meetings because of her pale skin and because she and William carefully constructed their performances for the British stage: ‘Ellen would remain silent on stage because black women do. were not supposed to speak in public, and William would describe their escape and the brutality of slavery. “

British audiences were mesmerized by Ellen’s pale skin and dismayed that she may have once been a slave.

The Crafts learned to read and write, spent more than two decades educating the public about slavery, and published their autobiography. They returned to America in 1868 and opened a school for black children in Georgia.

Their story is told today by a Leeds-based artist and historian Joe williams in his play, Meet the Crafts. Ellen and William Craft, he explains, were recorded in the Leeds census of 1851 and recorded as staying in the abolitionist house. Wilson armistead. In the “occupation” section, they are recorded as “fugitives from slavery in America”.

Master of Subterfuge
Another incredible story of escape through disguise and subterfuge is that of Henry “Box” Brown, who was born a slave in Richmond, Virginia, in 1816.

He returned from work one day in 1849 and found that his wife and children had been sold. He decided to orchestrate an incredibly risky escape, a year after the Artisans achieved theirs.

Brown paid for a box to be made, measuring three feet by three feet and six feet wide. He tightened up and posted himself from Virginia in the south to Philadelphia in the Free North. Holes were made in the box for him to breathe, he had water and cookies for the trip, and was carried by wagon, boat and train. The trip lasted 72 hours and the Philadelphia abolitionists describe how, when they opened the box, “Brown came out and sang a hymn to freedom: he was finally free.”

However, as with the Crafts, the passage of the Fugitive Slave Act forced Brown to leave for the UK. In England, Brown traveled the country, realizing his escape, as well as drawings from Harriet Beecher Stowe’s famous anti-slavery novel. Uncle Tom’s Cabin (1852) to create a panorama of slavery on stage. Brown toured Yorkshire and performed at Music Hall in Hull.

Change the story
Brown was a born showman. A central part of his act emerged from the original box in which he had traveled to freedom. He was also known to roam the streets of English towns dressed in traditional African clothing, posing as an African prince.

He publishes the first edition of his autobiography in 1849. After marrying an Englishwoman, he returned to America in 1875 and continued to perform until his death in 1897.

The stories of Crafts and Henry “Box” Brown are examples of people using their wits and creativity, as the Caribbean slave hero Anansi would, to survive the most appalling circumstances.

They are essential to our understanding of the history of slavery. Slaves were not passive victims – they were an integral part of the political abolition processes in the UK and put their intellectual, creative and artistic weight behind the movement.

In Yorkshire, performers and artists like Joe Williams continue this legacy through their work. And in doing so, they make a much needed intervention in our well-worn, Wilberforce-centric abolitionist narratives.

Emily zobel marshall is a lecturer in postcolonial literature at Leeds Beckett University. This article is republished from The conversation under a Creative Commons license. Read it original article.

Why Osun celebrated Independence Day with an essay contest – Oyetola