One such translation by Judith Gautier misinterpreted Li Bai’s “Banquet at the Tao Family Pavilion” (701-762 AD) as “Le Pavillon de Porcelaine”. The Chinese character tao designates both the surname and the porcelain.

For years, the mistranslation has made it difficult for scholars and musicians to trace the original poem behind Mahler’s third movement “Of Youth,” but famed bass-baritone Shen Yang enjoys such incidents of cultural exchange. .

“Some people, including scholars, say that classical music inspired by Chinese poetry fails to capture the mood or spirit of the original prose,” Shen told the Shanghai Daily in a recent interview.

“I don’t agree. That’s the fun of such cultural exchanges, where we can find many examples when we learn foreign culture through translations.”

On Friday, Shen performed a concert titled “Variations of Jade ― The Journey of Tang Poetry”, in which he sang 17 songs inspired by Chinese poetry in seven languages. The concert also featured engineer-turned-pianist Zhang Yiming and actor Wang Yaoqing who told the story behind the creation of each song.

Shen, who came up with the idea for this concert 10 years ago, chose the 17 songs from more than 500 he discovered over the years. Most of these songs were created by European composers between the 19th and 20th centuries, thanks to the publication of several translations of Chinese poetry.

Bass-baritone Shen Yang and pianist Zhang Yiming at the “Variations of Jade ― The Journey of Tang Poetry” concert.

Gautier’s “Livre de Jade”, which includes the translation error of tao in porcelain, is one of the publications that have had a great impact and have given rise to numerous musical creations. About half of the concert program are songs based on poems in this translation.

“‘Das Lied von der Erde’ is very famous, but many people don’t know that Mahler wasn’t the only one, or the fact that many composers at that time created works that used Chinese poetry as a source of text,” Shen explained. .

“Many have been performed and then forgotten, that does not mean that they are not great works, or that they do not deserve to be staged again. Often, that a work can be remembered is a sheer coincidence. Many masterpieces that we know so well today were forgotten for decades or even more than 100 years.”

Shen invited his friend David Wang, a famous Taiwanese actor, to help tell the story of how the songs were made, hoping it will bridge the gap with the audience. Many songs have touching stories that are not widely known.

For example, some of the last songs composed by Czech composer Pavel Haas (1899-1944), who was assassinated in the Holocaust, were a set of “Four Songs on Old Chinese Poems”. 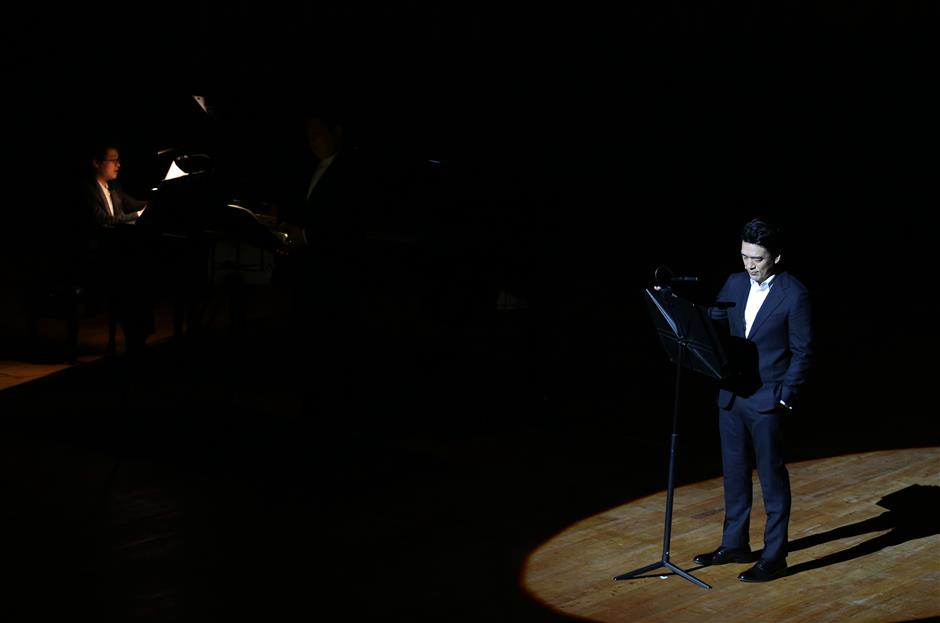 Actor David Wang introduces the story behind the creation of each song and its relationship to Chinese poetry and culture.

“Just imagine that,” Shen said, pointing to “Far Is My Home, O Moon” in the concert program, No. 3 of the set. “In the last days of this Czech composer in the concentration camp, he resonates with this Chinese poem.”

It is one of the most famous ancient Chinese poems. The first two lines have been used or adapted in many Chinese novels or songs.

“The bright moon shines above the sea, and from afar we share this moment together.”

It is the most famous poem by Zhang Jiuling (AD 678 or 673-740), who was royal chancellor. He could not have imagined that some 1,200 years later, a Czech musician from afar resonated with his poetry in a different language, and 80 years later, a Chinese singer sang the famous lines in Czech on a music stage. classic in Shanghai.

“This is not a concert we will expect to applaud, in fact, we won’t leave space for the audience to applaud,” Shen concluded.

“Because the applause belongs to our ancestors who created such wonderful lyrics that inspired artists from afar, and to those artists who resonated with otherworldly culture and created something new and aspiring .”

[ad_1] Amanda Gorman caught America’s attention by reciting poems during the inauguration of President Joe Biden and the 2021 Super Bowl. Her comprehensive poetry book, “Call Us What We Carry,” has just been released. It is an attractive collection of a wide variety of subjects and formats. I’m no poetry expert, but I appreciate his […]

The poetry of integrity – La Chronique

[ad_1] From ancient times to the present day, poets have played an important role in human civilizations. As Edward Hirsch says in the book “A Poet’s Glossary, ” “Poetry is a human fundamental, like music. Robert Graves calls poetry “stored magic.” And poetry can be magic. A poetic line with an economy of words can […]