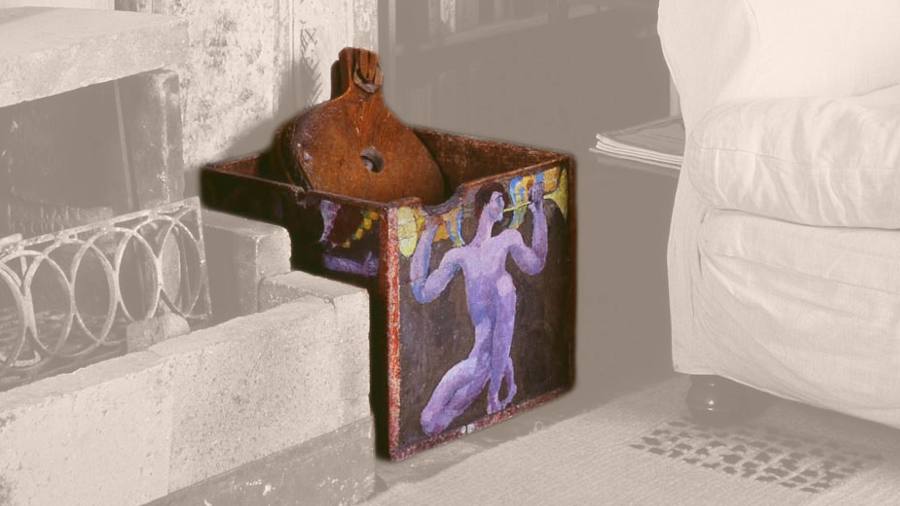 Home in 50 objects from around the world # 11: Charleston log holder

“They lived in squares, painted in circles and loved in triangles,” Dorothy Parker said wryly of the members of the Bloomsbury group. As artistically and romantically unconventional as they are, in the early years they rarely strayed from opulent homes amidst the elegant squares of London.

Led by writers Virginia Woolf and Lytton Strachey, painters Vanessa Bell and Duncan Grant, and critic Roger Fry, the innovators of the early 20th century rejected the restrictions of Victorian bourgeois life and prioritized private pleasures over the public duty. Their liberalism encompassed politics and art, spilling over into their complex and interwoven personal relationships.

In 1916, at the height of World War I, Vanessa Bell moved to Charleston, a farm in Sussex, taking Duncan Grant and her lover David Garnett with her, both conscientious objectors. Amid the triangular banter, Grant and Bell set out to decorate every surface of the house in an exuberant post-impressionist style, their goal of making art a part of everyday life.

No household item was too low. Grant’s painting elevated this unpretentious log rack, for example, from mundane utility to thing of beauty.

Grant had been trained in Paris, and the influence of Picasso, Cézanne and Gauguin can be seen in these flowing, stylized figures modeled after the dancers of the Ballets Russes, their poses and movements are ideal subjects for his abstract experiments. The paintings evoked – in keeping with Charleston’s philosophy – “a spirit of casual and languid eroticism,” according to art historian Simon Watney.

The bohemian idyll in the countryside welcomed a flood of guests. Artist Dora Carrington offered a glimpse of life there: “We lived in the kitchen and cooked and ate there. . . Everyone lacking good manners at the table. & the most vague cuisine breathed in[sic]. . . What poseurs they really are.

A view shared by others who, despite Bloomsbury’s unmistakable contributions to British culture, have decried its members as a posh clique whose racy lifestyles have eclipsed their accomplishments. As writer Andrew Sinclair said, “Rarely in the realm of human endeavor has so much been written about so few of those who have achieved so little.

In 1937, Bell’s son Julian was killed during the Spanish Civil War; her sister Virginia Woolf committed suicide four years later. Charlton’s heyday was waning, but Bell and Grant stayed there until their deaths – in 1961 and 1978 respectively – happily covering his furniture with paint until the end.