Perhaps one of the most important legal terms in the 21st century is “religious freedom.” As my colleague, University of Cincinnati political scientist Andrew Lewis, explains in his most recent book, The Rights Turn in Conservative Christian Politicsreligious conservatives began to center their legal strategy on the right of individuals to practice their faith without fear of government reprisals.

The most notable example of this strategy is the Masterpiece Cakeshop v Colorado Civil Rights Commission case, in which two men sued the owner of a Colorado bakery who refused to create a cake for their wedding. The store’s defense rested on the fact that the baker held deep religious beliefs about marriage and that being asked to violate those beliefs by serving two people of the same sex would infringe on the baker’s religious freedom.

But liberal Christians do not hesitate to use the arguments of religious freedom themselves. Just weeks ago, St Timothy’s Episcopal Church in Brookings, Oregon, filed a lawsuit because the city passed an ordinance limiting the number of free meals each week residential area organizations could provide homeless people. The law was passed after neighbors complained about the disruption caused by St Timothy’s Meals Ministry.

The basis of the church’s lawsuit is that the city ordinance prohibits worshipers from practicing their religious beliefs. Like Masterpiece Cakeshop, the church argues that its actions are protected by the “free exercise” clause of the First Amendment.

It turns out that support for religious freedom is popular with all Americans — as long as it doesn’t limit the other freedoms we all share.

In late 2020, the Becket Fund for Religious Liberty surveyed a thousand Americans, asking a number of nuanced questions about religious freedom. The results seem to indicate that while Americans see the value of religious freedom, they believe it has limits.

Overall, a majority of Americans support religious freedom, whether or not they call themselves a “person of faith.” But while nearly 40% of people of faith believe that religious freedom is too poorly protected in the United States, this view is only shared by 18% of people who say they are not religious.

At the other end of the spectrum, 20% of Americans who say they are not religious think religious freedom is overprotected. Only seven percent of religious people agree with this.

As the pollsters’ questions became more nuanced, it was clear that the average American is more likely to give religious practices more leeway when they have the least impact, but more hesitant to protect beliefs. and behaviors that bother others in the community or workplace.

For example, more than 85% of Americans believe it is “somewhat important” or “absolutely essential” that an American has the right to choose the religion of his or her choice. The same percentage believe that the right to practice one’s religion without fear of persecution is a key element of religious freedom. 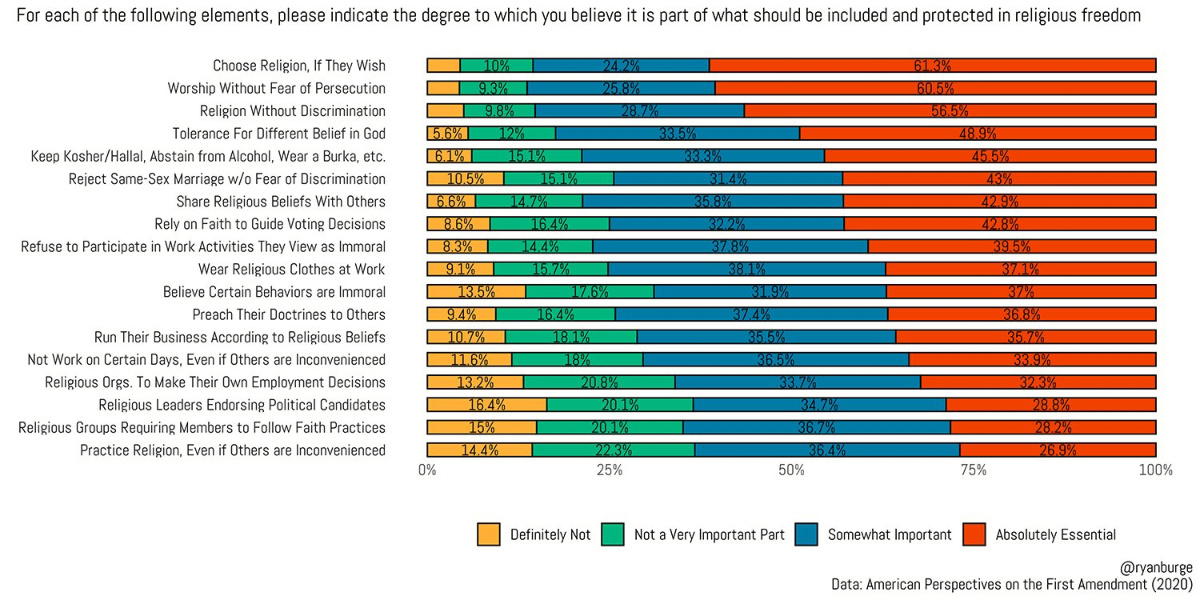 But nearly 37% of people say practices that bother others are “definitely not” or “not a very important part” of religious freedom.

This disadvantage seems to include religious views on politics, especially in places of worship. Nearly 35% of respondents said religious freedom should not extend to the right of religious leaders to endorse political candidates.

It should be noted that in these cases, a majority of Americans believe that religious freedom should apply in these circumstances. There is broad support for the idea that religious organizations and individuals should have a large place in society. But those are high percentages of dissent when a religious practice gets in the way of another American.

There were also many contradictions. In a part of the survey in which Americans were asked to respond to a variety of statements about religious freedom, three in five adults agreed that religion is a fundamental part of some Americans’ identity and should be protected. . However, 42% of this same group agreed that religious beliefs are often used as an excuse for bigotry. 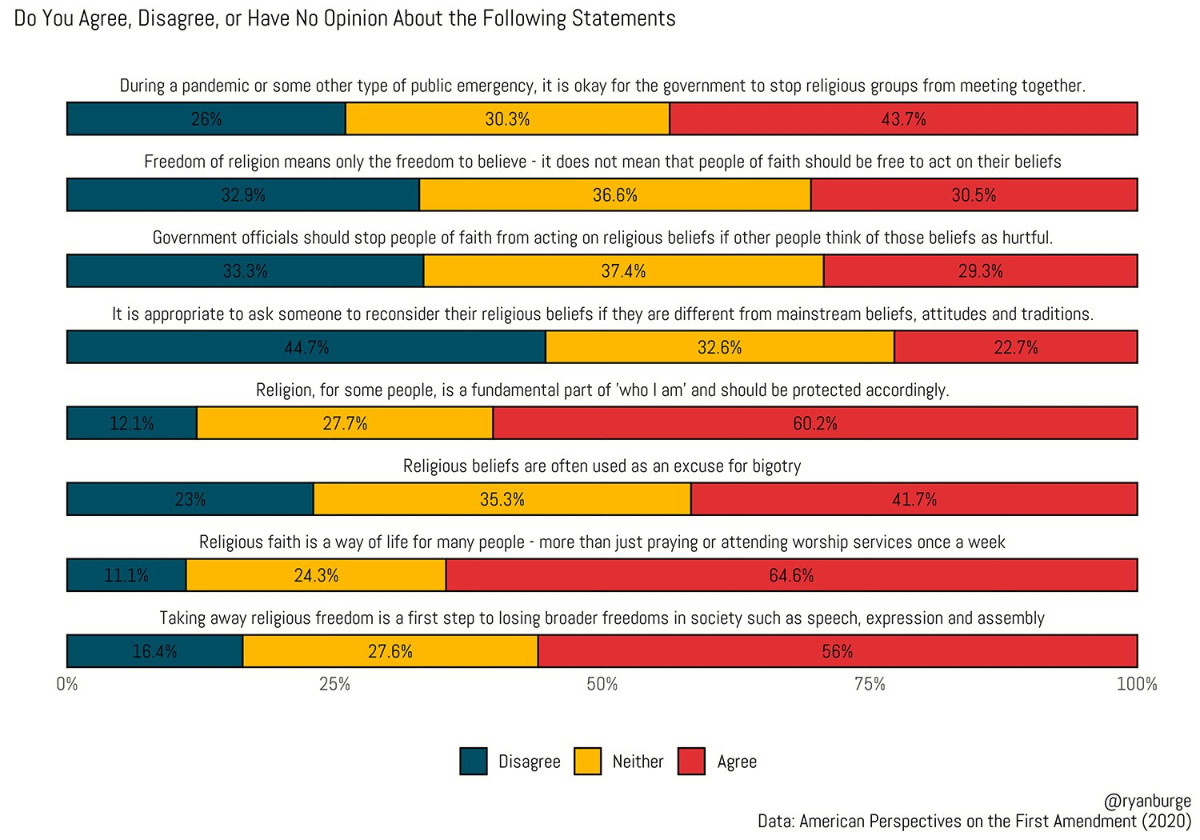 Elsewhere, 56% of Americans agreed that “cutting down religious freedoms is a first step toward losing broader freedoms,” but 44% agreed that it was appropriate for the government to prevent religious groups from meeting for a period of time. pandemic or other public emergency.

Anyone who studies the opinions of Americans knows that they are often in direct contradiction to each other. They often say they want to reduce taxes and the federal deficit, for example, but also express strong support for expensive government programs and others. But the message from Becket’s poll for preachers and politicians is clear: Talking generally about religious freedom will win admirers. Just avoid telling anyone what to think of specific cases.

Ryan Burge is assistant professor of political science at Eastern Illinois University, pastor of the American Baptist Church, and author of Les Nones: where they come from, who they are and where they are going. He can be reached on Twitter at @ryanburge.

This article contains an affiliate link.

Future Funk: walking corpse or rising phoenix? “Please stop using the term ‘future funk’ which is not a real thing and you are embarrassing yourself when you say this. Do a little research and learn the history of disco house music and funk – Saint Pepsi on his Discord server. This message was sent by […]

May 19, 2022 MALCOLM MACKERRAS As you head to your local polling station this Saturday or cast your vote in early voting, it’s worth pondering: how does Australia’s voting system really work, anyway? The foundations of our electoral system have been shaped by the democratic values ​​enshrined in the Australian Constitution and the pragmatic decisions […]

Glens Falls Hospital is proud to be one of the first hospitals in the region to offer the Medtronic Micra ™ AV, the world’s smallest pacemaker with atrioventricular (AV) synchronization. This new device dramatically increases the number of candidates for leadless pacing technology, which offers a host of potential benefits for patients. Micra AV is […]