The COVID pandemic has triggered an unprecedented increase in deaths around the world, leading to a drop in life expectancy. When researching last year, we found that 2020 saw significant loss of life expectancyincluding more than two years in the United States and one year in England and Wales.

In a new study published in Nature Human behavior, we have now shown that in 2021 life expectancy rebounded somewhat in most Western European countries, while Eastern Europe and the United States recorded further losses. However, only Norway has beaten its pre-pandemic life expectancy in 2021, and everywhere the situation is worse than it probably would have been without the pandemic.

We knew the outlook for 2021 was mixed, with excitement over vaccine rollouts tempered by large numbers of infections caused by a range of new, highly transmissible variants.

To assess the impact of these changes on life expectancy, our research team at the University of Oxford Leverhulme Center for Population Sciences and the Max Planck Institute for Demographic Research collected data from 29 countries, mostly European (plus Chile and the United States).

“Life expectancy is a measure that we use to summarize a country’s mortality pattern in a given year. It is calculated based on deaths from all causes, so it does not depend on the accuracy of recording COVID deaths, and can give us a broader picture of how the pandemic has affected mortality.

Life expectancy is a measure we use to summarize a country’s mortality pattern in a given year. It is calculated based on deaths from all causes, so it does not depend on the accuracy of recording COVID deaths and can give us a broader picture of how the pandemic has affected mortality.

Life expectancy is not a prediction of how long a baby born today will live. Rather, it is the number of years someone born today could expect to live, if they lived their entire life with the current year’s (or 2021 in the case of our research) death rates. It is therefore a snapshot of current mortality conditions, should they continue without any improvement or deterioration.

Demographers consider life expectancy to be a very useful summary measure of population mortality because it is comparable across countries and over time. Large swings up or down can tell us that something drastic has changed, as is the case with COVID. The magnitude of these declines allows us to compare mortality shocks over time and across space. 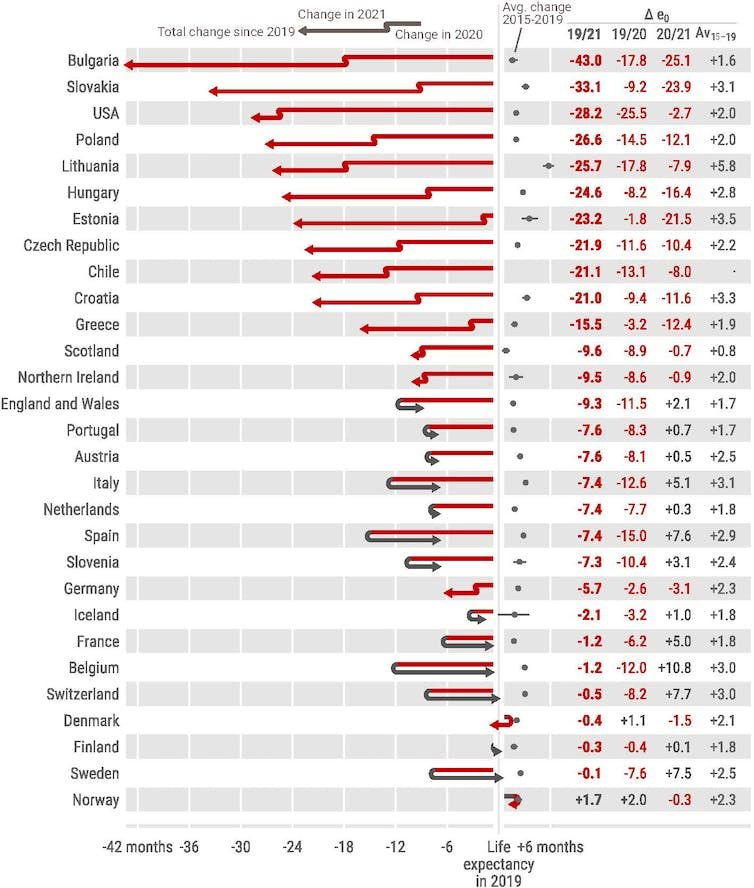 Life expectancy during COVID-19
We found that there was much more variation between countries in the impact of the pandemic on mortality in 2021 compared to 2020. Life expectancy fell for virtually every country we studied in 2020 , with the exception of Denmark and Norway. But in 2021, for some countries, life expectancy has improved compared to 2020, while for others it has worsened further.

The further falls we saw in Eastern Europe were likely due to the region avoiding some of the first waves of COVID in 2020combined with drop in vaccination rate when big waves came in 2021. Bulgaria was the most extreme example, with a staggering loss of 3.5 years since 2019 (1.5 years in 2020 and two years in 2021).

Despite a early vaccine deploymentthe United States continued to deviate from Western Europe with an additional loss of almost three months in 2021 after losing more than two years in 2020. The United States had decrease in vaccination and booster rates compared to Western European peers, which likely explains some of this difference in 2021.

But life expectancy in the United States lagged behind European countries for many years, some of this American disadvantage may therefore reflect underlying health vulnerabilities that have been exacerbated by the COVID pandemic. While most of their loss of life expectancy can be attributed to deaths confirmed by COVIDthe United States has also seen a continued increase in the number of deaths due to drug overdose.

England and Wales fell somewhere in the middle, gaining 2.1 months in 2021 after losing nearly a year in 2020. Even for countries that have done relatively well, COVID has still derails the trajectory of mortality improvement that we would normally see year on year.

Life expectancy at birth by country, 2019-2021
Overall, deaths shifted slightly towards younger people in 2021 compared to 2020. This is likely due to better vaccination coverage and more precautions at older ages.

Indeed, countries with better vaccination coverage for those over 60 have obtained better results in terms of life expectancy. U.S. over-80 mortality has even returned to pre-pandemic levels. But overall life expectancy was worse in 2021 due to worsening mortality before age 60.

We also compared recent declines in life expectancy with historic crises that have resulted in significant deaths. Losses to the degree we have seen during the pandemic have not been recorded since World War II in Western Europe, or since the breakup of the Soviet Union in Eastern Europe.

Meanwhile, previous flu epidemics have seen fairly rapid rebounds in life expectancy levels. So far, the impact of COVID has been greater and more persistent, contradicting the common claim that it’s “just like the flu.” 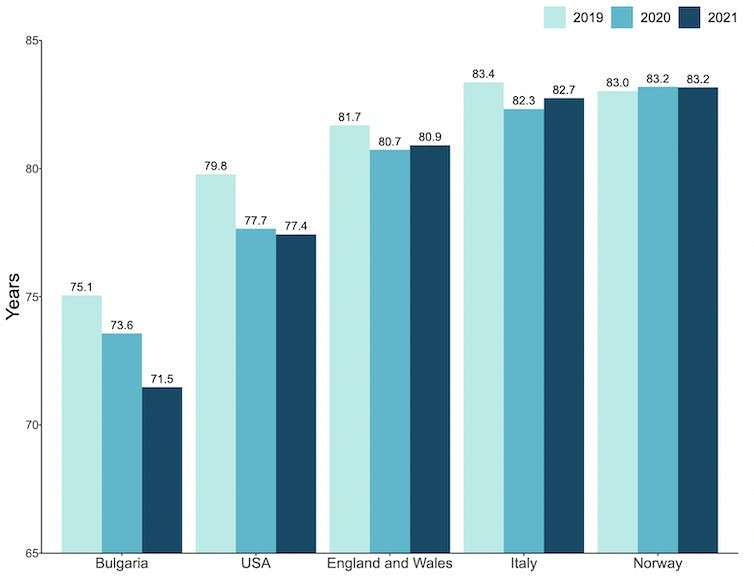 Limits and future prospects
Because estimates of life expectancy require accurate death data by age and gender, we were unable to accurately calculate life expectancy for all countries in the world in this study. .

We know that countries like Brazil and Mexico suffered significant losses in life expectancy in 2020, and it is likely that they will continue to suffer additional losses in 2021. COVID mortality in countries like India may never be accurately accounted for in due to data limitations, but we know the death toll was considerable.

Looking ahead, prospects for a recovery in life expectancy in 2022 and beyond are still unclear. We anticipate continued divergence due to country differences in vaccination and booster shots, past infections, and ongoing public health measures (or lack thereof).

The full impact of delayed healthcare and continued strain on the healthcare system remains to be seen. New variants that evade existing immunity are likely to emerge, and the longer-term impact of COVID infections on the health of survivors is a big unknown.

While we hope that mortality will return to pre-pandemic levels (and even start to improve again), a excess mortality in England and elsewhere in 2022 suggests that we have not fully rebounded from the impact of the pandemic on mortality, and that the path to recovery remains uncertain.

[ad_1] As a former elementary school teacher, co-founder of the Community Legal Services (CLS) Youth Justice Project, and mother of two young children, I care deeply about the well-being of children, youth, and families. During my 10 years representing young people as a lawyer at the CLS, I have come to believe that Pennsylvania ChildLine […]

How to write a college application essay

Elliot Page wrote an amazing essay about his identity, his career and his favorite books

[ad_1] Page also reflected on the character who made him famous, the titular pregnant teenager of the indie classic. Juno. “People, especially teenage girls, really responded to this character, Juno,” he wrote, adding that the character’s “vibe” was “new for a film that reached the audience it reached, and with her as the main character.” […]