“You can mock union hacks without them confronting you”

The first interview bomb came almost immediately when the new writer ordered a glass of milk instead of coffee. This, of course, immediately sparked an intense journalistic investigation into the psychological complexities of this decision. Once I recovered from this shock, we started talking.

Porter’s Log recruitment system is very unorthodox: the Head Porter described how he got spotted based on an article published in another Cambridge newspaper. Quite typical of the Porters’ Log, the Head Porter describes how they encourage writers to “recruit anyone they find funny”. The more recent writer’s recruiting story was even more interesting: he was recommended to Porter’s Log based on an overly satirical Tab app (interesting that you can be too funny for the Tab… I try not to be offended that they let me in).

Maybe one of the days when the newspaper was funnier than the news… (Image credit: screenshot by author)

The writing environment is “casual and fun”. The writers meet on an unspecified day of the week in a variety of pubs with a copy of an unspecified Cambridge student publication (*cough* Varsity *cough*). “If the editing of the newspaper is good, we laugh at the news, if the editing is bad, we laugh at the newspaper.” They brainstorm ideas for titles and cartoons, then send people to write. It’s a “very collaborative process” and writers often help each other with ideas. “We’re a pretty large community…we have a few Footlights, a few Blues, student journalists and a surprising number of stem students.” “Turns out mathmos are actually pretty funny.” 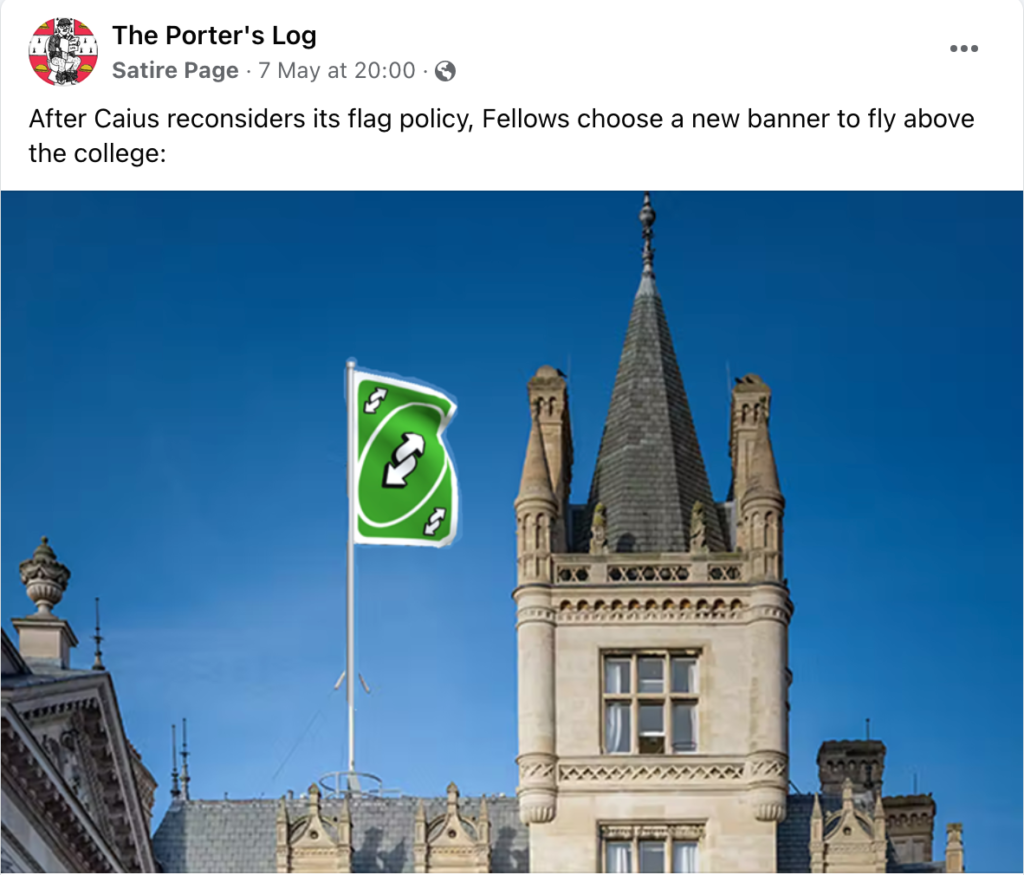 The Porter’s Log keeps its readers up to date with current events. (Image credit: screenshot by author)

It’s notorious that all Porter’s Log writers are anonymous, which means “you can poke fun at union hacks without them confronting you.” It is also a tradition at this stage: the writers have been anonymous since the creation of the newspaper in 2015. There are limits to anonymity, “my friends and mom know” admits the chief porter and “some brag about it when they’re a few pints down” (the cooler writer admitted he had committed this sin).

Although the Porter’s Log falls far short of the number of complaints Varsity makes, they’re getting their fair share of backlash. “The Christian union complained. Varsity too. The most dramatic and hilarious recent example of backlash was “a writer was a little fed up with seeing Timothée Chalamet everywhere so he did an article on ‘ten reasons why I hate Timothée Chalamet’.” Somehow it got retweeted in America and we were bombarded by hundreds of Americans who didn’t know it was a joke. “We normally try not to hit or fall into clichés.” For example, on Sunday C, “we didn’t want to make the easy joke that drinking societies get drunk”. 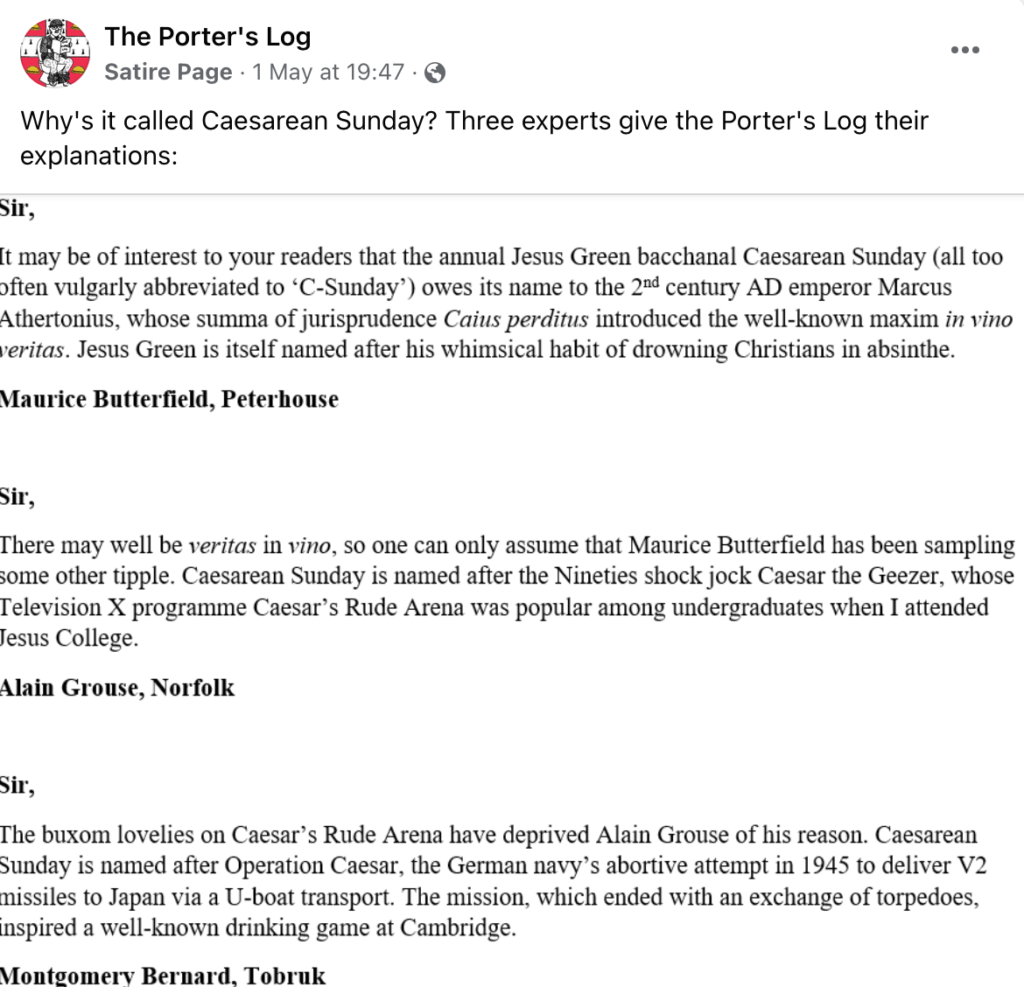 An overview of Sunday traditions C (Image credit: screenshot by author on Facebook)

Obviously, I wasn’t going to leave an interview with Cambridge’s oldest satirical newspaper without a question or two about its latest competition. “Never heard of it.” Never? “Not at all smug or pompous, but they haven’t posted since March. The Porter’s Log is “more established,” having been around since 2015. “It’s actually kind of depressing to go back and read the old stuff…they were a lot funnier than us.” This does not mean that the Plog is a massive operation: “it’s probably a little less than ten people who contribute regularly”. “We are not a large institution, we have a current net worth of £30 which I might have accidentally misappropriated.”

When asked to give a pitch to budding writers, the Chief Porter succinctly commented that the Porter Diary “is a good way to have fun if you like to have fun.” Added to this is the “No BNoCs” bonus, because the team is made up of “lonely people who won’t be spotted in the pub” (note: you don’t have to be alone to write for Plog). “It’s only once a week” and “we take ourselves a little less seriously than the rest of the Cambridge student press” (obviously not counting the Tab here). 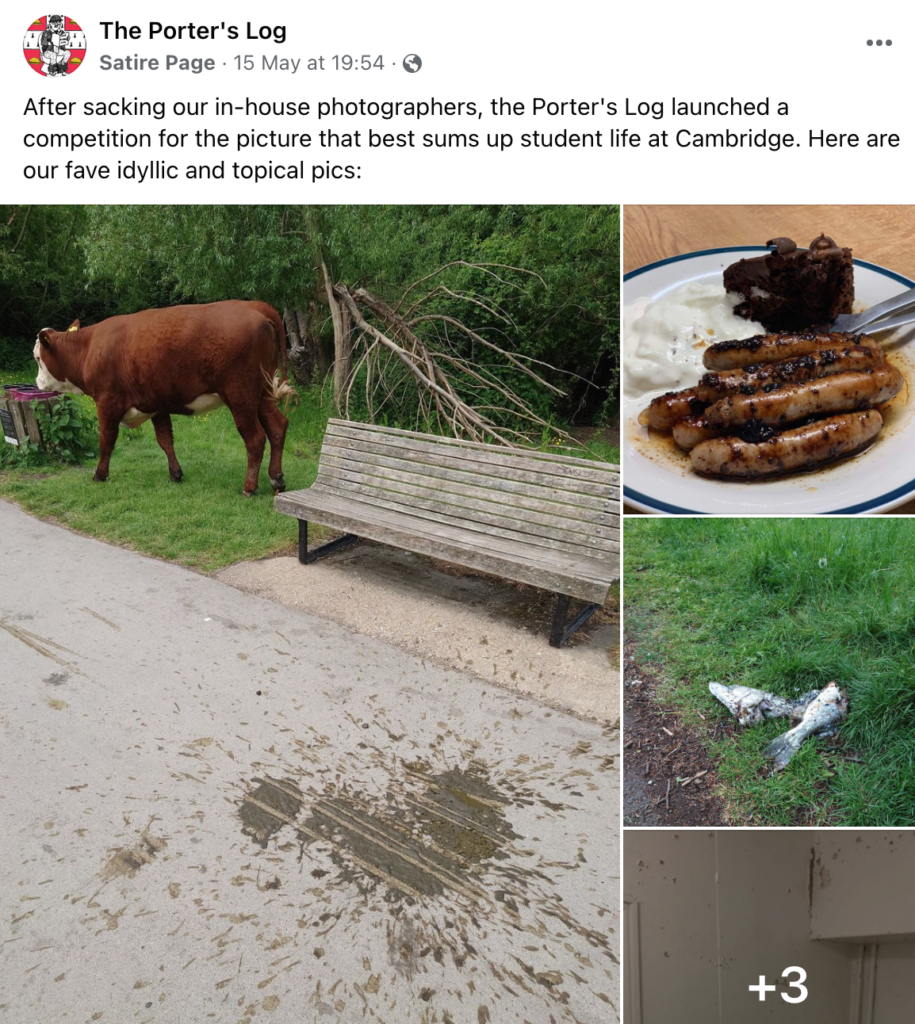 Next, I asked the Head Porter’s opinion on the really important question in Cambridge life: where are the most beautiful porters? “Trinity definitely has the most beautiful porters. I agree with them on all their political opinions. Finally, I asked Porter’s Log to rank Cambridge student posts: “I’m going to put TCS first just to hurt your typing (ouch!). Then the tab. Then the Cambridge Globalist. The university is definitely down. The Tit Haller? “I’ve never heard of it, so I couldn’t include it.”

Related articles recommended by this author:

Written by Heather ervin Pervinder Johar, Blume Global Pervinder Johar, CEO of Blume Global, gives his take on the challenges facing the intermodal industry; prepare for future logistical disruptions; the role of advanced technology; visibility and sustainability of the supply chain; seamless transition of data from sea carrier to rail in transit; and growth opportunities […]

With spring break in full swing, 9-year-old Bobby Stuart and his sisters Nina, 7, and Mia, 5, headed to the DoSeum on Tuesday afternoon to explore the children’s museum’s many interactive exhibits. Chaperoned by their grandmother, Carolyn Stuart, they were surrounded on all sides by other like-minded families. Parents pushing strollers or walking hand-in-hand with […]

Recording the events that occur in an IT environment is at the heart of any security strategy. The best way to ensure that these events are tracked and stored is to implement a comprehensive security log management framework. Read on to learn more about managing security logs and learn about security logging best practices to […]